Painter Dinie Boogaart each time undergoes the creation of her oil paintings as an adventure. 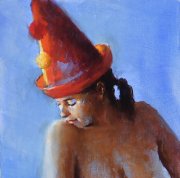 Her preference is for painting people. Portraits and nudes. Dinie Boogaart (45) is a tad hesitant in admitting this. She dislikes her work being thus pigeonholed. For over the past several years she has also built a reputation with her – mostly Frisian – spacious landscapes as well as her still lifes. Her intriguing figurative and monumental work (‘I love big canvases’) is popular, regionally but also nationally. Both among private collectors and companies. Thus she has painted thirteen beach views for the interior of the luxury cruise ship, the Queen Mary II. 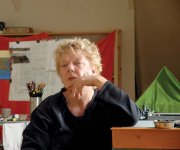 She mainly does oil paintings and occasionally pastels. ‘From a painter’s point of view I am always focused on light, colour and clair-obscure – these are pre-eminently the characteristics of my painterly style. I paint what people radiate. What they (in)voluntarily show in their shifting moods, but it is really hard to verbalise this.’ During the recent exhibition ‘Kunstenaars en Modellen (Artists and Models) in Museum-cum-Gallery Van Lien (in Fijnaart, Brabant) her work was characterised as follows: ‘Dinie Boogaart makes consistent and full use of her ability to felicitously represent the model’s psychological essence in oil.’ She herself says: ‘In my canvases I want to express what fascinates me in people. They are sublimated expressions that I create with a profound empathy and strong commitment. This, by the way, applies to everything I paint or draw.’ 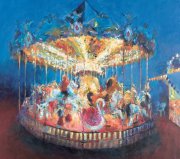 In her studio-cum-gallery, a converted pre-school kindergarten in Nijega, Friesland, Dinie Boogaart enthusiastically explains her artistic thinking and activities. This she does in a very direct unfussy way and with an aversion to superfluous embellishments. Her husband, Jean-Pierre Boogaart, who runs a frame-maker’s shop in the same building, occasionally adds a few remarks. ‘We are a company,’ he says. Dinie Boogaart assumes the artistic role and her husband looks after the business interests. Together they act as one unit.


Dinie Boogaart, who was born in Sneek (Friesland), realised at an early age that she had a talent for the plastic arts, drawing and painting, and that she had to demonstrate her talents. At the age of seventeen she went to the Academie voor Beeldende Kunsten (Academy of Visual Arts) in Kampen, after which she moved to the Rijksacademie Amsterdam, where she successfully took her final exams, and next she went to Minerva, the Groningen-based Academy of Visual Arts, for her teaching qualifications.
These three academies were major influences on her development as a painter. In Kampen Dinie Boogaart learned how to empathise with the model during model drawing. ‘Literally and figuratively you have to feel how the human body is constructed. The forms should always be right. And in Amsterdam she moulded in clay. ‘This has taught me quite a lot.’ These were some prerequisites for later being able to develop a style of her own. 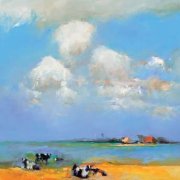 Though she at first for a number of years had a part-time teaching job, the urge to be absolutely free and to be able to pursue her ambitions was very strong. And her artistic successes finally enabled her to do so. ‘I paint what I have to paint, this is the freedom I strive for. I do sometimes paint commissioned portraits, but at present rarely so. I do not at all feel like making concessions.’ The will and the urge to paint are overwhelming. This is what she wants to devote herself to completely. She once let herself be quoted in a publication as saying that painting is a ‘way of life’ for her. Consequently, ‘there is no difference between my life and my work.’ In her work, therefore, the distance between art and life is small.

Painting she considers to be a craft, requiring a strict and daily discipline. In this she brooks no compromises, for in her view ‘you have to enforce inspiration.’ Though her studio is a model of tidiness and order (‘In this I am a very organised person’) she admits that inside her head she is ‘chaotic’. ‘Ideas and subjects are continually popping up in my mind. During the daytime but also at night in bed.’ Her work is as it were imprisoned in her mind. ‘But,’ she immediately adds, ‘I do not of course lose sight of daily reality. You regularly have to distance yourself and to see things in perspective.’
She is a doer and in her view the final result on the canvas is what is crucial. ‘Again and again this is a thrilling experience. But not everything is a success.’ With respect to this she refers to a saying by the Swiss-German author Hermann Hesse: ‘Talent has to coupled and balanced with character, inspiration with discipline, skill and the creative urge with restraints.’ This has become her motto.

With her highly accessible work this Frisian painter has managed to reach a large public. Annually she produces between 80 and 90 paintings. ‘I work hard but I will never allow myself to be led by sales figures. Success is not my overriding ambition. Then you walk into a trap with open eyes. I only paint what gives me inspiration. I have to fully believe in my canvases. Nothin more and nothing less.’
Over the past several years she has exhibited her paintings in a lot of well-established Dutch galleries and she is still participating in group exhibitions a couple of times every year. ‘I want to show my face and hence my work in other parts of the country as well.’
Since the early nineties she has had a gallery of her own in Nijega, near Drachten, showing exclusively her own paintings. So quite a luxury. ‘No, I am not complaining.’ Every autumn, from late November till mid-December this gallery shows her most recent work with between 30 and 40 paintings.


Last year this took place for the ninth time. Interest was considerable with corresponding sales.Those interested came from the Netherlands, Belgium,Germany, France and Great Britain.That people like her work she appreciates, but that is not all. ‘Paramount to me is the pleasure I have in my work and the affinity I develop with my canvases. That is why I sometimes have a hard time letting them go.’

The gallery is usually open on Sundays from 13.00 to 17.00 and of course by appointment and, during the autumn exhibition of her latest works, on Friday, Saturday and Sunday from 13.00 to 18.00.
Her latest book was privately published in November 2007 entitled Zoeken (‘Searching’). It provides a overview of Dinie Boogaart’s paintings, portraits and landscapes from 2000 up to and including 2008. To be ordered by email info@dinieboogaart.nl